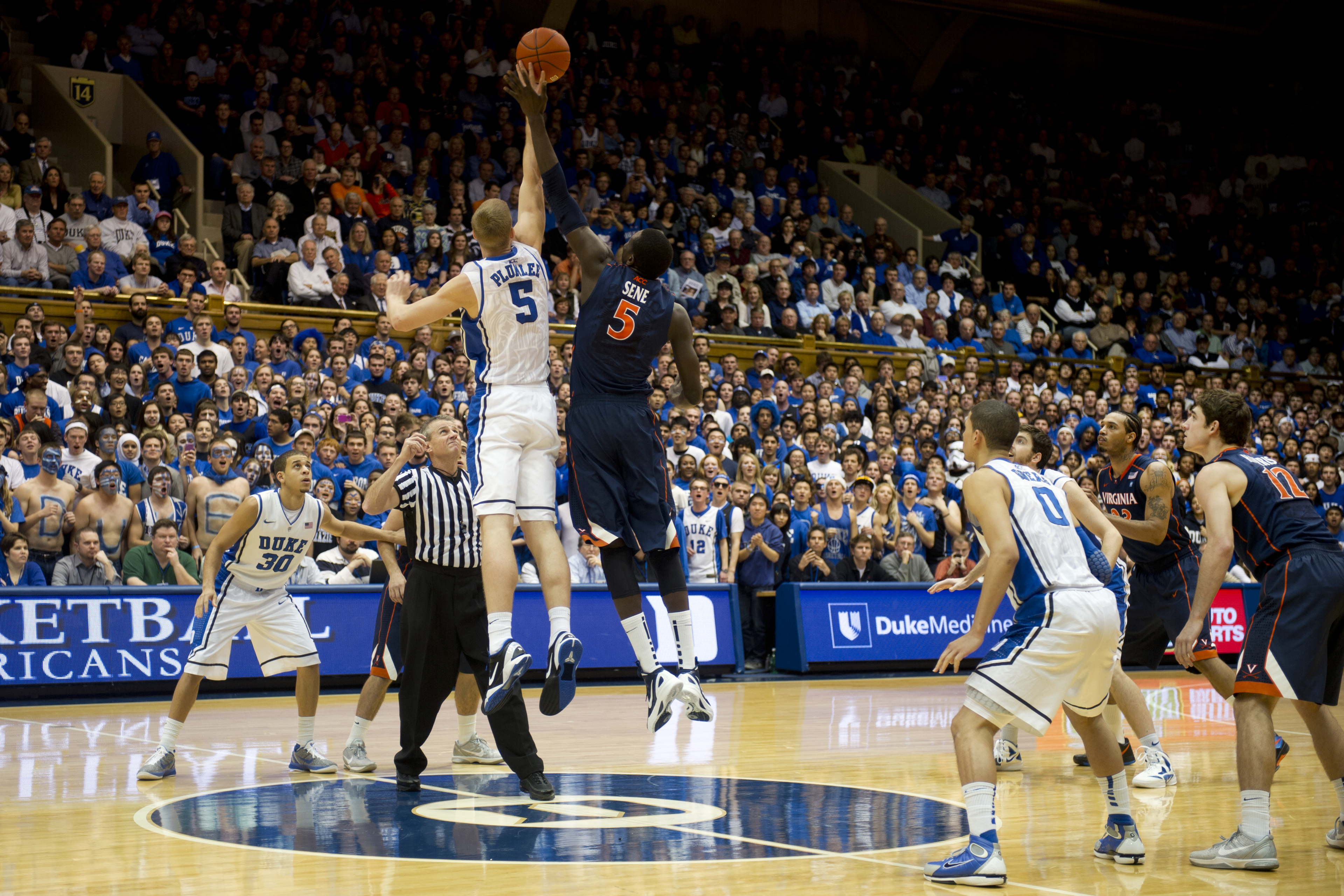 Each organization has different conferences to divide up the teams into groups. Teams are selected into these conferences depending on the location of the schools. These conferences are put in due to the regional play of the teams and to have a structural schedule for each team to play for the upcoming year. During conference play the teams are ranked not only through the entire NCAA, but the conference as well in which they have tournament play leading into the NCAA tournament.

The history of basketball can be traced back to a YMCA International Training School, known today as Springfield College, located in Springfield, Massachusetts. The sport was created by a physical education teacher named James Naismith, who in the winter of 1891 was given the task of creating a game that would keep track athletes in shape and that would prevent them from getting hurt. The date of the first formal basketball game played at the Springfield YMCA Training School under Naismith's rules is generally given as December 21, 1891. Basketball began to be played at some college campuses by 1893.

The first known college to field a basketball team against an outside opponent was Vanderbilt University, which played against the local YMCA in Nashville, Tennessee, on February 7, 1893, where Vanderbilt won 9–6. The second recorded instance of an organized college basketball game was Geneva College's game against New Brighton YMCA on April 8, 1893, in Beaver Falls, Pennsylvania, which Geneva won 3–0.

The first recorded game between two college teams occurred on November 22, 1894, when the Drexel Institute of Art, Science and Industry (now known as Drexel University) faced Temple College (now known as Temple University). Drexel won the game, which was played under rules allowing nine players per side, among many other variations from modern basketball, 26–1. The first intercollegiate match using the modern rule of five players per side is often credited as a game between the University of Chicago and the University of Iowa, in Iowa City, Iowa, on January 18, 1896. The Chicago team won the game 15-12, under the coaching of Amos Alonzo Stagg, who had learned the game from James Naismith at Springfield YMCA. However, some sources state the first "true" five-on-five intercollegiate match was a game in 1897 between Yale and Penn, because although the Iowa team that played Chicago in 1896 was composed of University of Iowa students, it reportedly did not officially represent the university, rather it was organized through a YMCA. By 1900, the game of basketball had spread to colleges across the country.

The first known tournament featuring exclusively college teams was the 1904 Summer Olympics, where basketball was a demonstration sport, and a collegiate championship tournament was held. The Olympic title was won by Hiram College. In March 1908, a two-game "championship series" was organized between the University of Chicago and Penn, with games played in Philadelphia and Bartlett, Illinois. Chicago swept both games to win the series.

The first organization to tout a regularly occurring national collegiate championship was the NAIA in 1937, although it was quickly surpassed in prestige by the National Invitation Tournament, or NIT, which brought six teams to New York's Madison Square Garden in the spring of 1938. Temple defeated Colorado in the first NIT tournament championship game, 60–36.

In 1939, another national tournament was implemented by the National Collegiate Athletic Association (NCAA). The location of the NCAA tournament varied from year to year, and it soon used multiple locations each year, so more fans could see games without traveling to New York. Although the NIT was created earlier and was more prestigious than the NCAA for many years, it ultimately lost popularity and status to the NCAA Tournament. In 1950, following a double win by the 1949–50 CCNY Beavers men's basketball team (when the NIT comprised 12 and the NCAA 8 teams), the NCAA ruled that no team could compete in both tournaments, and effectively indicated that a team eligible for the NCAA tournament should play in it. Not long afterward, assisted by the 1951 scandals based in New York City, the NCAA tournament had become more prestigious than before, with conference champions and the majority of top-ranked teams competing there. The NCAA tournament eventually overtook the NIT by 1960. Through the 1960s and 1970s, with UCLA leading the way as winner of ten NCAA Tournament championships, a shift in power to teams from the west amplified the shift of attention away from the New York City-based NIT. When the NCAA tournament expanded its field of teams from 25 to 32 in 1975, to 48 in 1980, to 64 in 1985, and to 68 teams in 2011, interest in the NCAA tournament increased again and again, as it comprised more and more teams, soon including all of the strongest ones. (Expansion also improved the distribution of playing locations, which number roughly one-third the number of teams in the field.)

In 2020, for the first time in the NCAA's history, the tournament had to be canceled due to fears of the COVID-19 pandemic. This move was done largely out of fear of the virus spreading to players and watchers, with prior attempts to limit the spread without canceling by first choosing to limit attendees, and then canceling the tournament in its entirety.

The cancellation of the tournament, due to the COVID-19 pandemic, led to a lot of uncertainty for the coaches, players, and NCAA as a whole. Many people were very disappointed and had wished it was just delayed, rather than completely being cancelled. Unfortunately, this pandemic really effected the seniors on the teams, considering their last season just got abruptly taken from them. The NCAA did consider granting waivers to the student athletes who participated in winter sports (including basketball) so that they could regain eligibility for the 2021 season. However, many of the seniors were projected to be picked in the NBA draft, so this led to the difficult decision of playing one more year with their college teammates or moving on to the big stage.

Racial integration of all-white collegiate sports teams was high on the regional agenda in the 1950s and 1960s. These issues included inequality, racism, and the alumni demand for the top players needed to win high-profile games. The Atlantic Coast Conference (ACC) took the lead. "College basketball data allow for direct comparisons of the racial differences in the marginal revenues generated by players" (Brown and Jewell 1995). First they started to schedule integrated teams from the North. The wake-up call came in 1966 when Don Haskins's Texas Western College team with five black starters defeated the all-white University of Kentucky team to win the NCAA national basketball championship. This happened at a time when there weren't any black varsity basketball players in either the Southeastern Conference or the Southwest Conference. Finally ACC schools—typically under pressure from boosters and civil rights groups—integrated their teams. With an alumni base that dominated local and state politics, society and business, the ACC flagship schools were successful in their endeavor—as Pamela Grundy argues, they had learned how to win:

The widespread admiration that athletic ability inspired would help transform athletic fields from grounds of symbolic play to forces for social change, places where a wide range of citizens could publicly and at times effectively challenge the assumptions that cast them as unworthy of full participation in U.S. society. While athletic successes would not rid society of prejudice or stereotype—black athletes would continue to confront racial slurs...[minority star players demonstrated] the discipline, intelligence, and poise to contend for position or influence in every arena of national life.

The original rules for basketball were very different from today's modern rules of the sport, including the use of eight players per side. James Naismith established 13 original rules:

The following is a list of some of the major NCAA Basketball rule changes with the year they went into effect.

For the 2022 season, there are some new rules that will be implemented. The goal of adding these rules is to make the game, overall, more offensively entertaining and to avoid some foolish behavior that is sometimes present on the court. The first change is moving the men's college basketball three-point line from twenty feet and nine inches to 22 feet 1.75 inches. The women's line stayed the same distance, meaning there will now be two different lines on the collegiate floors.

Another rule that will be implemented is the clock will change to only 20 seconds on an offensive rebound. The point of this rule change is to increase the tempo of the game and to add more possessions. However, if the ball gets back to the midcourt line, the clock will reset back to 30 seconds. Another interesting rule change is getting rid of flopping.[1] Teams will get one warning, and then the second flop will be a technical foul. This rule change will help to minimize the number of delays during games, due to players faking injuries or foul play. Also, in the 2022 season, more rules are to be implemented on the number of flagrant fouls to eventually lead to an overall cleaner game.[2]

The One-and-done rule has been a part of college basketball since 2006, the first NBA draft it affected. The rule was created by NBA Commissioner, David Stern, which changed the draft age from 18 years old to 19 years old. This change meant players could not be drafted into the NBA straight out of high school. Instead, however, they usually went to a college to play only one season before entering the following NBA draft when they are eligible, hence the name One-and-Done.[] The first player to be drafted during this "one-and-done era" was Tyrus Thomas, a forward out of Louisiana State, who was drafted fourth overall in 2006.[]